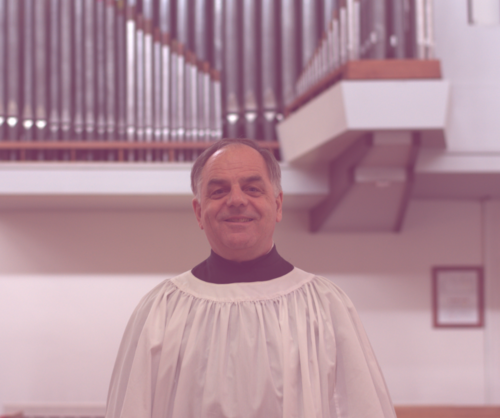 Richard feels fortunate to have the opportunity to serve the Church of St. Andrew as organist and choir director.  Although these are challenging times, especially for musicians, the singers and Canon Donald have shown great commitment to produce recordings of the music each week, so we can all praise our Lord with our songs, drawing on the great heritage of sacred music.

One of Richard’s great passions is to enable congregations in vibrant hymn singing.  Every week, as it says in Psalm 21: “We will sing and praise Your power” (Psalm 21:13).  Richard is waiting patiently for the church to open up again, so we can have regular choir practices and fill the church with glorious hymns and anthems, as well as musical events.

Richard believes in the power of music as a tool for outreach and community building.  At Trivitt Memorial Anglican Church, under his guidance, the music outreach program expanded by touring in the area with the South Huron Community Choir, holding hymn sings to raise funds for the food bank and inspiring the Youth Choir to raise funds for the Nepal earth quake victims with the musical play “The Drum.”  During his tenure as choir director and organist at All Saints Catholic Church, each year the choirs held a Christmas concert and provided music for the Passion Play.  The children’s choir enjoyed singing at St. Michael’s Cathedral and at Martyr’s Shrine in Midland.

For fifteen years, Richard and his wife Lourdes owned and operated Forte Music School in Richmond Hill.  During that time Richard was also the chair of the Richmond Hill Music Festival and the Choral Extravaganza, with Lourdes serving as the administrator of these organizations.

Since 2001, Richard and Lourdes have lived in Richmond Hill with their sons Christopher and Benjamin.